Film Courage
Multiple interview segments on writing for the screen.

On The Edge with Andrew Gold
He asks the hard questions, I answer the easy ones.

To The Best of Our Knowledge on PRI
How does his childhood as a Jehovah’s Witness play a role in his novel?

Meredith For Real: Is Purity Culture Damaging?
Confessions of a Teenage Jesus Jerk

IndoctriNATION with Rachel Bernstein
Rachel speaks with Tony DuShane about growing up in the Jehovah’s Witnesses, leaving the group, being disconnected from his family, and rediscovering his life, from dating and sex to finding a new creative purpose. Check out his film “Confessions of a Teenage Jesus Jerk” on Amazon and Google Play!

A creepy but fascinating book on one of the most dangerous sect in the world (which counted among its members, recalls the author, Michael Jackson or Prince). 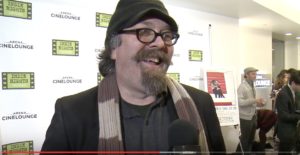 SarahTalk Podcast Episode 111
Tony DuShane discusses his book and film, “Confessions of a Teenage Jesus Jerk”, the comedic coming-of-age story of a young Jehovah’s Witness, which is informed in part by Tony’s own experiences in the church.

Publishers Weekly, Starred Review
DuShane writes with an insider’s perspective about this unique world, balancing criticism with
understanding and a convincing portrait of the struggle to integrate religion into a modern world, producing an ultimately touching story that will speak to atheists and believers alike.

San Francisco Chronicle, Book Review by Alan Black
Some novels start out with a fair wind but blow themselves out long before reaching the final passage. Not this one. Getting on DuShane’s narrative arc is a voyage worth taking.

Boston Globe, Fundamentalist Teenage Wasteland by Steve Almond
“DuShane also nails the sense of fear and paranoia that grips younger members of his congregation. It’s like having the Stasi crash your school dance.”

Portland Mercury, Meet the J-Dubs by Dave Bow
“As the novel progresses, underlying sadness threatens to overwhelm its wit. Thankfully, though, Gabe’s interior dialogue is constantly funny, a fevered litany of PG-13 desires.”

San Francisco Chronicle, Author’s Experience Informs Story of Conflicted Youth by Evan Karp
[DuShane] confronts these weighty issues with that same kind of emotional honesty, he presents them in a remarkably comic tone that could only be possible with the right amount of distance and personal maturation.

SF Sounds essay for Confessions of a Teenage Jesus Jerk

Ask me anything for Urban13 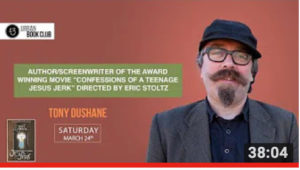 Ashcan Magazine, Interview by Sean Logic
They were right, satanic music will totally get you out of the Jehovah’s Witnesses.

The Barcelona Review, 11 Questions for Tony DuShane
Memoir tells the story, fiction shows the story. From the beginning I knew in order to deal with a heavy theme, I had to give it a light brush stroke and stay inside Gabe’s head.

Radio interview regarding the novel and growing up a Jehovah’s Witness
Hosted by Russ Foster on Pirate Cat Radio.

The Barcelona Review, Review by Jill Adams
I love this book for its excellent storytelling, for the clarity and effectiveness of the prose, for making me laugh, for causing me to gasp and to feel empathy for so many of the characters.

Pop Dose by Scott Malchus NOTE: SPOILER ALERT
The pressures to conform to his religious upbringing and to try and please his parents makes Gabe?s story, and Confessions of a Teenage Jesus Jerk, a fascinating and often, heartbreaking read.

Portland Mercury, An Interview with Jesus Jerk’s Tony DuShane by Dave Bow
“It’s embarrassing, but I also think it’s true to the human condition, so I’m not embarrassed by that. I’m sure Gabe is and if he ever became a human being he’d probably sucker-punch me.”

The Brooklyn Rail, Jehovah Jerk by Christopher Vola
“It provides a sharp and powerful introduction to a poignant new voice.”

Colorado Springs Independent by Kel Munger
A wise and funny coming-of-age story about a guy who doesn’t know he’s an artist, if only because he’s never seen any art.

Three Imaginary Girls
“DuShane adroitly lets us into this veiled world but also makes the awkward longings and petty punishments relatable for anyone who’s craved both familial and community acceptance but wanted personal freedom, too.”

The Oregonian, review by Steve Duin
“Because DuShane’s prose is stripped refreshingly and equally clean of pomp and pretense, Confessions of a Teenage Jesus Jerk is a book that will stay with me for awhile.”

The Last Book I Loved, by Evan Karp for The Rumpus
“Freedom is something we can all get used to. Don’t.”

San Francisco Examiner, Book Review by Hugh Thomas Patterson
He conveys his story from the heart and it shows. Rather than bury the reader with large, out of place words meant to bolster the writer’s ego, DuShane uses his words with the economy of Steinbeck.

Hipster Book Club, Review by Jennifer McCartin
“Tony DuShane has created a highly engaging narrative that is as hilarious as it is deeply moving.”

Hipster Book Club, An Interview with Tony DuShane by Mark Haskell Smith
“He’s funny, awkward, fucked up, and sincere, and he makes reading this novel a surprisingly heart-warming experience.”

Jehovah’s Witnesses Are Funny! (At Least This Former One Is) by JD Sugar
Dushane’s story–at one moment hilarious at another gut-wrenchingly disturbing–portrays the anguish and intensity of one thoughtful religious teen’s journey on his way not to paradise but to the frontier of selfhood.

Not About Religion, review by Todd Hebert
“The book is simply too engaging.”