Tony DuShane is the author and screenwriter of Confessions of a Teenage Jesus Jerk, published by Soft Skull Press and directed by Eric Stoltz. 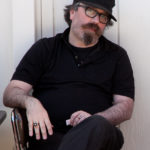 His journalism and essays has appeared in The Los Angeles Times, Mother Jones, Penthouse, The Rumpus, The Believer, and other media outlets. He was a music columnist for The San Francisco Chronicle and wrote 100s of articles covering books, film, and music for the newspaper between 2006 – 2015. His radio show and podcast Drinks with Tony ran from 2002 – 2015 and included many guests including Steve Buscemi, Nick Cave, Richard Hell, Chelsea Handler, Miranda July, and more. DuShane teaches novel writing at UCLA Extension.